Read about the impact of Can't Stop Columbus

Larry, an elderly Vietnam War veteran, sits on a bright red chair outside his apartment in Old North Columbus, closing his eyes and letting the weighty chords of “Hallelujah” wash over him. He’s been missing his church friends during the coronavirus quarantine, and now – thanks to this song – he knows they’ve been missing him, too. The musician, a stranger, strums the final notes, then adjusts his mic to better read from his phone’s screen: “Larry, your fellow church member Sara sent you this song, and this message, ‘We’re thinking of you and really care about you. You’re going to get through this, we’re all going to get through this together.’” By now, Larry’s neighbors have cautiously moved into doorways and onto lawns, unable to resist the spectacle of this stranger singing and playing from the back of a pickup truck. The neighbors turn to Larry, clapping and cheering, giving him an audial embrace. “Play ‘Come Together’!” someone yells, and Will Freed does. 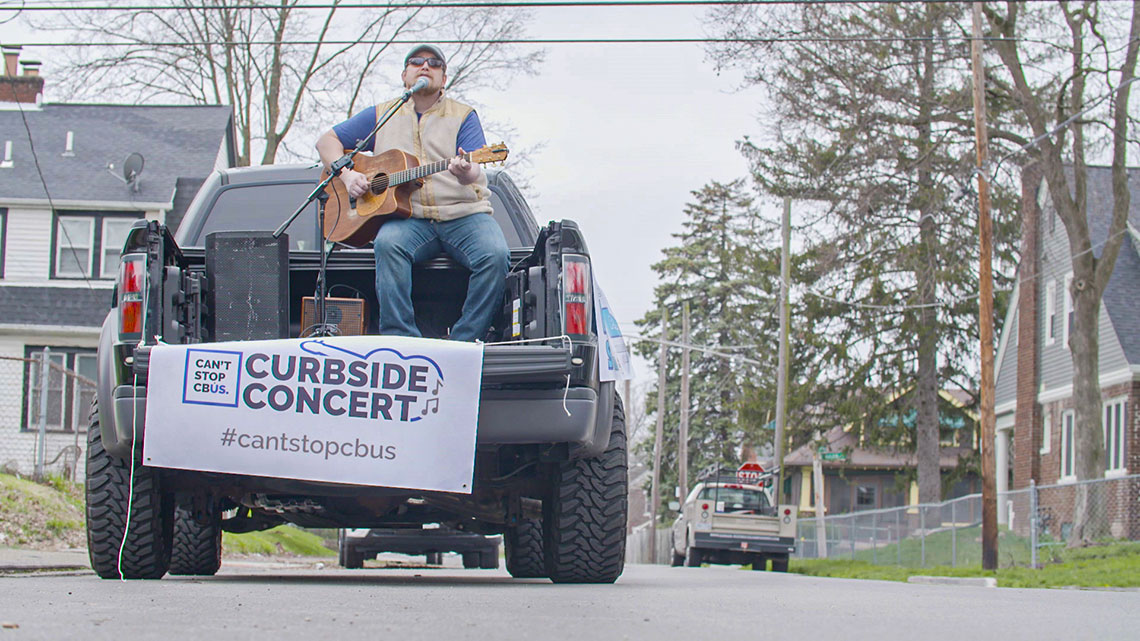 Will Freed is a professional singer and songwriter who has played countless gigs, but none quite like the kind Can’t Stop Columbus (CSC) pitched him two weekends ago: no venue (unless you count the truck bed), just you, your guitar, a mic and an amplifier, performing a song request or two per visit, a one-man-band on wheels. Freed instantly signed on; he had already set up a Facebook page for broadcasting performances during social distancing, and he had a hunch these “Curbside Concerts” would be one more way to “bring a little light into the darkness.”

“I’m so elated and thrilled to be a part of this,” says Freed, whose wife works in the medical field. “It’s emotionally rewarding for me in this weird time when everybody’s so stressed and worried.”

To find out more about the amazing performers and songs available, go to SendAConcert.com.

This idea came to be through a human-centered design process led by The Columbus Foundation and Can’t Stop Columbus, an initiative of Smart Columbus. The Greater Columbus Arts Council has provided the funding to pay for local artists to play for you. The concerts will come to you in a pick-up truck provided by Ricart Automotive.The reservation and scheduling platform has been developed pro-bono by Test Double. Social media management is being handled through pro-bono support from Futurety.

Can’t Stop Columbus Volunteers lead the coordination, communications and operations support to make this all possible.

Wish You Were Here

Curbside Concerts emerged from a CSC design sprint around the question: “How might we enable the community to have meaningful dialogue with our socially isolated elder community, so that elders feel connected, empowered and cared for in these turbulent times?”

To make sure they were solving the right problem, CSC volunteers used a process called design thinking, and formed empathy teams to interview elderly Columbus residents: What did they value? Who constituted their community? What social connections had been lost or altered because of the quarantine?

The most interesting insight they gained turned out to be something people of any age can relate to: In the time of COVID-19, we don’t feel like we’re allowed to have fun. We feel like we have to be serious at all times.

As Zach Friedman, one of Curbside Concerts’ organizers, puts it, “Even when the world is falling apart and you’re really concerned, there are these ‘amusement traps’ – moments, people, or experiences that can trick you into having a good time. We saw an opportunity to create more amusement traps for the socially isolated.”

One “amusement trap” the team considered was a musical float, but they concluded it would go against the personalized experience they wanted to create. They eventually hit upon the audio equivalent of a Valentine. Friedman explains, “We want to make sure it’s not just us showing up and playing at random places. It’s us saying ‘YOU sent love to someone and we’re that messenger.’ But it’s more than a text, it’s an experience and it’s showcasing, not only to that person, but to everyone else around, that you love them, that you care for them, and that kindness is here even if we’re all quarantined and isolated.”

Carolina (or Kentucky) in my Mind

It’s Sunday, April 5, the second trial weekend of Curbside Concerts, and musician Freed is en route to a recipient. His new friend, Friedman, is driving the Ricart truck. Freed looks at his cell phone and softly exclaims, “Somebody wants us to come to Kentucky!”

Friedman grins, “I don’t think we can drive to Kentucky today, unfortunately. Maybe we can have people in Kentucky access the technology we’re building to make their own local version of Curbside Concerts.”

Friedman continues brainstorming as he drives, “The whole idea is this isn’t just something for us [in Columbus] to do. If people in different communities want to get in touch with us and get help providing some of these things and leveraging some of the technology we’re building to make this more seamless, we’re happy to connect.”